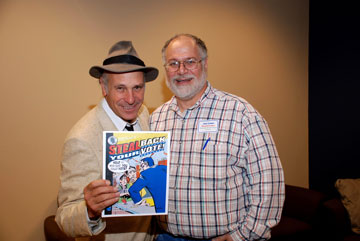 The Thurston County Progressive Network (TC Pro-Net) grew out of a coalition-building committee that was formed by Sherri Goulet, Christian Fromuth and others after the November 2004 elections. A committee of community members worked for approximately 4 months creating the Network as a coalition of individuals, businesses and organizations which share similar values.

The first big event was the Memorial Day Picnic of 2005 at Tumwater Falls Historical Park. TC Pro-Net has sponsored a Progressive Town Hall Picnic and Candidate Forum every summer since then.

Some of our most recent events are the Public Power Forum and the Sustainability Summit in 2012, the Food Summit and “Meet the Occupiers” in 2011.  Events co-sponsored with South Puget Sound Community College’s student organization BRICK were free public lectures featuring Mike Farrell in 2007, Greg Palast in 2008, and Vandana Shiva in 2009. TC Pro-Net has one fundraiser in March: Let Them Eat Cake and Love Art. Another annual event is the October Birthday Bash which is TC Pro-Net’s annual meeting.